Let’s say John is in New Delhi, India, and wants to stream video content hosted on a website. The website is on a hosted server in California. When another viewer, Anne, who stays 500 km away from California, visits the website, the content loads pretty faster. But for John, who stays 12500 km away, the site takes comparatively more time to load as the website content has to travel more. This is where Video CDN comes to the rescue. The CDN finds an optimal server in physical locations closer to the physical location of the user.

CDN distributes the content over its various servers across the globe. The media file remains cached or temporarily stored on that CDN for other user requests in the same geographical region. The next time when a user requests the same content, the video file is served from the CDN, minimizing buffering, latency, and overwhelmed request burdens on the origin server. CDNs have freed host origins from the burden of distributing every content to the visitor from the website. The content is uninterruptedly served via CDN even when the servers go down, or the network is congested. 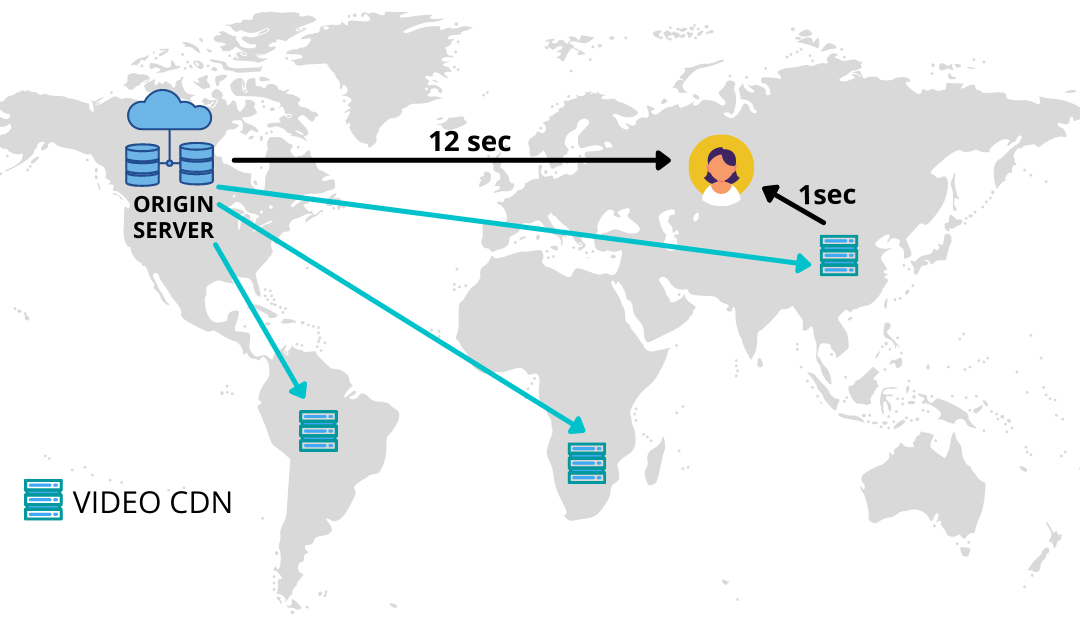 What is Video CDN or Video Content Delivery Network?

The streaming and delivery of a video stream require a considerable amount of resource utilization. This is attributed to video quality, video resolution, and higher bitrates of video streams, requiring more information to reach the users. Owing to the high performance and speed of distributing content without disruption to end-users, most websites now serve video content through CDNs. A video CDN is specially designed to support the smooth delivery of VOD platform and OTT platform content. For example, Netflix, YouTube, Disney+, Amazon Prime, Dailymotion, they all use CDN. Most CDNs cache web content like web pages, CSS style sheets, images alongside video content.

Some video CDNs are built exclusively for video streaming. One such example is Open Connect, Netflix’s own distributed network. Content Delivery Networks or geographically distributed servers sit between the origin servers and the video players or clients to deliver a smooth viewing experience. In simple terms Video CDN can be considered as on demand distribution of a video file from nearby distribution centers which stores a copy for fastest delivery.

Why use Video CDN Streaming?

Let’s say someone made a video and uploaded it on a website or social video platform. The video became a sensation, and viewers from across the globe are requesting playback simultaneously. Or say a website hosting videos has high traffic and experiences surges at times. What will happen to the origin server when thousands of requests hit the website? Obviously, at some point, the server will struggle to cater to the bulk requests made at the same time. Some viewers may want to play the start of the video, while some may play the latter video segments.

Not only the origin server has the complete video file will get clogged up, but also the time it will take to cater to global demand will increase heavily. This is because of the difference in distance the origin and request. Although data travels at speed of time but such bulk requests from far away distance will start creating buffering zones. Some packets of video file get sent and there is a wait, and then the next one gets received. This latency is what the end user making a playback request will feel.

Benefits of CDN in Video Streaming

Buffering time and latency are directly related to how close the video content is to the viewer. CDN improves the performance by delivering content from the nearest server irrespective of device, location, or network usage. As a result, the video renders quickly, reducing any delays and ensuring the user remains engaged.

Reduces load on the origin server

Serving content from the CDN servers reduces the origin server being overwhelmed with stream requests. In addition, CDNs act as load balancers and prevent traffic congestion by alternating the request flow from origin servers to CDN servers.

When a user requests a stream, the video is not delivered to the user’s device as a continuous file. The stream is, in fact, broken up into many smaller segments and further into bits. These bits get transferred from an online server, collected as segments, and then the user’s video player puts the loaded segment in the correct order.

This happens at the front end where the playback is requested, but as we already discussed, the online server here needs to be a CDN located nearest to the user.

Similar to playback, when a stream gets uploaded to a cloud CDN, each Video file gets uploaded in a stream on bits. These bits get distributed and cached by the CDN servers in strategically chosen locations across the globe. When a user makes a streaming request, the CDN caches the video segments as soon as they arrive from the origin server. Next time for the same stream request, the CDN serves those segments from the cache. This is faster as the media files are cached close to the clients and mitigate data packet losses.

Some CDNs start making copies of the video file as soon as it gets uploaded on the network, and others wait for a request from the nearest location and then make a copy. Also, these locations are Internet exchange points (IXPs) which are primary locations where different Internet service providers connect in order to provide each other access to traffic originating on their different networks. Through these high-speed connections and highly interconnected locations, a Video CDN provider is able to reduce time and cost with high-speed data delivery.

In live streaming, video, audio or other media data gets streamed over the internet in real-time. The content in live streaming works without first being recorded and stored. There are five steps involved in live stream content creation and consumption by the end-user. The steps are video capture, segmentation, compression and encoding, content distribution and CDN caching, decoding and playback.

Also, if there is a disruption of user’s local network and the stream gets stuck, the user can resume quickly from nearest CDN server.

Akamai Video CDN is the name given to the set of CDN products released by Akamai Technologies, which combine a group of CDN servers and CDN servers that can deliver video and media. Originally launched in the United States and Canada in the 1990s, the CDN products became available in other regions during the 2000s. Akamai was one of the oldest CDN providers of the market, with over 250K servers in 135 countries.

You can upload your video content and reuse the CDN-based encrypted version of your video through many modes. Even integrations are supported by a web interface as well as via API for technical and bulk usage. Also, your processed videos will automatically have adaptive bitrate streaming for different bandwidth support.

Note: DRM encryption for Videos is currently the best available technology to safeguard your videos from piracy. This technology is encouraged by both Apple & Google.

The exponential growth in Over-the-Top (OTT) streaming services has opened ways for mobile operators and communications service providers (CSPs) to gain revenues and subscribers. To do so, telecommunications service providers (TSPs) have started to launch their own CDNs. As they own the network over which content gets transferred, Telco CDNs have advantages over traditional CDNs. The data reaches the end-user more securely and quickly due to being cached deep in the providers’ network. Providers also get better control over their resources and cost advantage by having their own CDN. In India, Reliance Jio and Airtel have their own CDNs. Jio and Cisco have partnered for mobile CDN integration while Airtel is leveraging Limelight Networks CDN. Content providers with packages on quality of service (QoS) will emerge as the winner.

How do e-Learning platforms benefit from Video CDN?

Do VOD, OTT and other media platforms use Video CDN?

For them using Video CDN is a must otherwise the latency will become too long and will also start blocking their main server. This also satisfies their purpose of serving a smooth user experience, fast loading time and video content availability even at aggressive traffic. Most OTT platform and other VOD platforms use secure video hosting services like VdoCipher to protect their original content from piracy as it is their most important data asset.

What is meant by Cache Miss and Cache Hit?

A cache miss is an instance when something gets searched up in the cache, and the data isn’t found. This happens when a request is made to the CDN for the first time. In case of a cache hit, the cache successfully serves the content or request.

What does Time-to-Live (TTL) refer to in respect to Content Delivery Network?

Time-to-Live refers to how long a cached content is served from the CDN edge server before a new copy gets fetched from the origin server. In other words, TTL controls the refresh rate of the cache copies stored on the CDN.

Does CDN affect a website’s SEO?