With Netflix’s popularity booming around the world, video piracy seems to be a major issue to combat. In 2020, Netflix spent nearly 12 billion U.S. dollars on its original content creation. Any illegal content distribution may lead to a decrease in paid subscribers and revenue loss. When people pirate movies and TV shows, they are less likely to subscribe to legal streaming services like Netflix. To fight video piracy, Netflix uses Digital Right Management (DRM) to protect the copyrights of its premium content. Netflix DRM is one of the most secured anti-piracy solutions for premium videos.

The need of Video Security for Netflix

Netflix is one of the most popular OTT/Video on Demand platforms. It serves thousands of premium movies and web series across the world. There is a lot at stake when topmost Hollywood and other global movie production houses are streaming and relying on the Netflix DRM Encryption. Its mechanism needs to provide highly secure streaming which should also provide a good viewer experience.

So primarily these are three reasons Netflix needs Video DRM for- 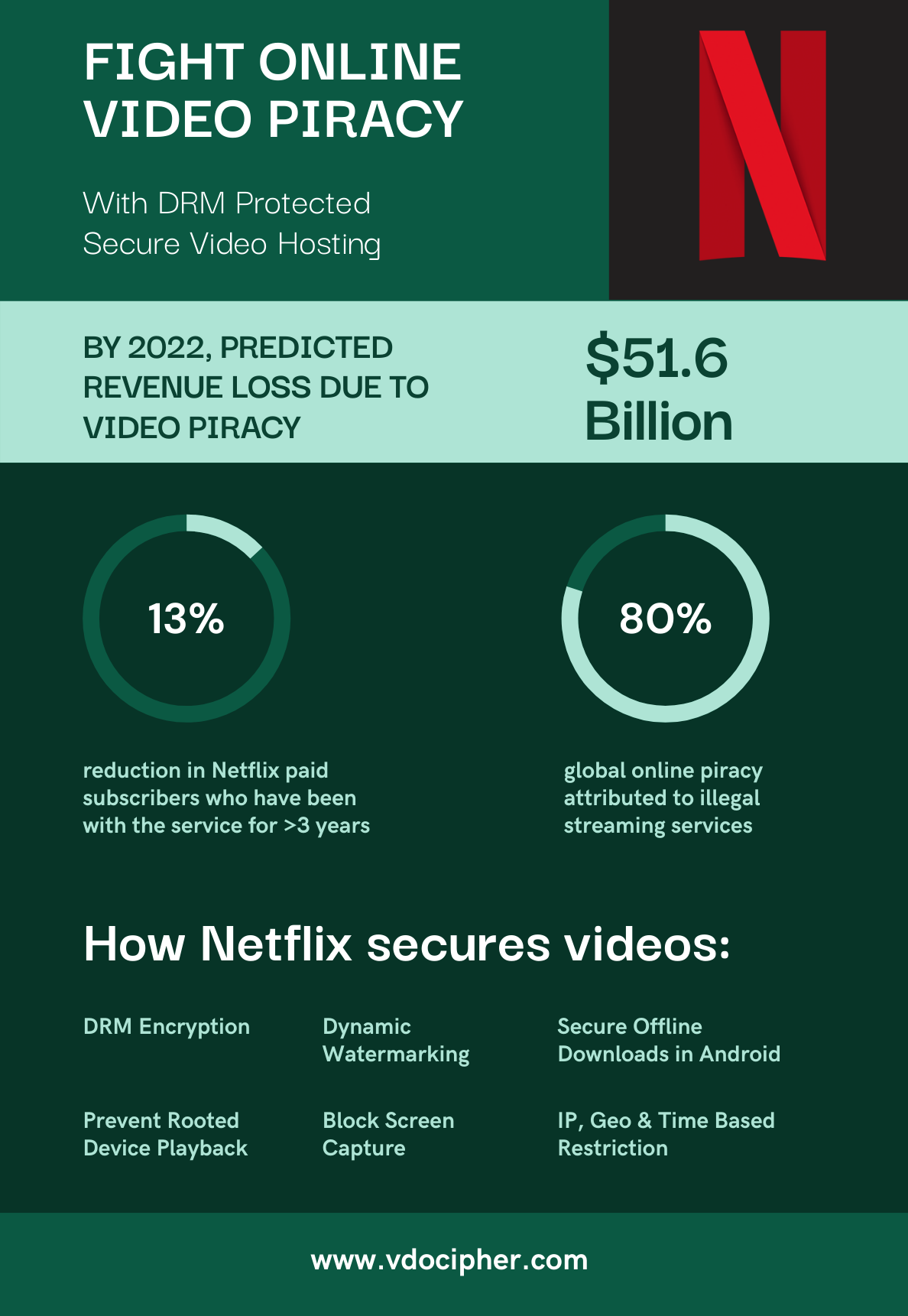 What is Video DRM?

The word DRM stands for Digital Rights Management. As the full form suggests, it is about managing and securing the rights of the content. Coming to the video, Video DRM generally means certain key video streaming security protocols maintained by likes of Google and Apple to prevent illegal video downloads in browsers and mobile apps. Two widely adopted DRMs are Google Widevine and Apple Fairplay DRM. We will explore more about DRM and how it helps Netflix in the below sections.

It is to be noted that same is not the case with the youtube pay per view movie platform. It does use video DRM encryption.

That is why the need for Video DRM came.

Adding DRM encryption to videos means, adding an encryption layer based on protocols of Google Widevine DRM and Apple Fairplay DRM. These DRM protocols are not open source. Since Google and Apple have browser/OS/hardware level control over the video playback in most devices, they are able to provide a blackboxed mechanism to secure the key exchange. In technical terms, this blackboxed mechanism is called a Content Decryption Module or CDM.

A detailed compatibility chart of these DRMs is included here.

Other Security Features of Video DRM

Other Security features apart from DRM used by Netflix

This is done with the help of EME or Encrypted Media Extensions which is a W3C specification for establishing a communication channel. This channel help web browsers communicate with DRM’s black boxed mechanism via Content Decryption Module (CDM) software.

This happens in Safari browser , android app and ios app.

Basically, for screen capture, a web browser communicates with the Video Player having EME which invokes DRM. Whenever a screenshot command is passed, it gets overridden via DRM secure playback and hence you get black screenshots or recordings. This mechanism combines the power of EME using HTML5 players to invoke the underlying DRM encryption.

Netflix and VdoCipher both use the same implementation for Screen Recording and Screenshots protection.

Netflix’s role in improving the DRM ecosystem across the internet

Since most of the population viewing online entertainment or course content are not themselves the platform owner, most of them are not in support of video DRM. While students feel that they are left out of free unlimited access to premium movies due to DRM, while on other hand some engineers are of the view that it is not right to have a blackbox (Content decryption module/CDM) in open web standard.

Browsers like Firefox who did not by default have DRM a few years back also had to implement it, else it would have led to a considerable loss of viewership to them.

There is a very small % of devices which have compatibility issues with Widevine DRM in android and are unable to play DRM secured videos. Such device % is estimated to be in the range of 0.1 to 0.3% based on our experience at VdoCipher. Such cases occur mostly in Android and not in Apple/Windows devices. Some of these issues are owing to the fact that sometimes manufacturers like Realme, Huawei, and Xiaomi try to implement their own OS along with Android and make changes in the OS system which causes such issues. Some of such issues are resolved in device updates. E.g. This support article/tutorial of Netflix on handling one such DRM issue.

How can I as a movie/course platform implement Video DRM with ease?

Earlier, DRM was mostly within the reach of large enterprises like Netflix, and Amazon because of the complexity of integration and the time it took for integration. This problem is addressed by VdoCipher – a video DRM + video hosting solutions provider which combines multi-device video playback & player with a robust Google and Apple Video DRM. The unique proposition of VdoCipher is that the integration effort required by the customer is minimal and even a single person owned website can integrate DRM based video playback with ease using VdoCipher. From a single person owned website to popular media/e-learning platforms with millions of users; VdoCipher is built to serve everybody who is in dire need of video security.

What all do you get?

If you want to read more on the  History of Netflix, do read the blog linked.

Here are some other interesting blog related to Netflix:

How does Netflix Encryption block screenshots?

Netflix uses a technology called digital rights management (DRM) to encrypt its content and prevent unauthorized users from accessing it. When you take a screenshot of Netflix content, the DRM software prevents the screenshot from being saved or shared.

How does Netflix DRM work to protect its content piracy?

Is there a visible Netflix watermark?