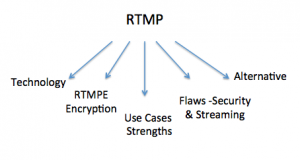 What is RTMP Stream?

Real Time Messaging Protocol or RTMP is used to stream multimedia data – audio and video  – between Flash Media Server and Flash Player. The chief utility of RTMP stream is in the optimization of the audio and video data transfer between the server and player. Its major use comes in Dynamic live streaming, and because of the encryption service RTMPE (which, despite of its security flaws, has a wide use). In this blog post, I expand upon –

RTMP stream does not use either of the 80/443 ports(HTTP/HTTPS) ports but instead uses the 1935 port. An exclusive port for video packet transmission signifies that the RTMP stream protocol is suitable for transmission of low latency content – essentially live streaming of video content, and streaming of media without buffering. However, by using this port RTMP stream becomes vulnerable to being blocked by certain corporate firewalls.

RTMP stream is theoretically optimal for low latency streaming as the RTMP pointer is always in sync with the media server at the exact point of the stream. This means that if there is a signal interruption for say 5 seconds, the flash player will not display the signal for 5 seconds, but would resume in real-time when the signal over the network resumes. The stream should therefore never lag in spite of poor network, although the quality of the video may suffer.

RTMPE is suitable for live streaming as it does not download any video packets except at the time of streaming – there is no buffering of content as would occur with a progressive media player. The bitrate can be dynamically decided to optimize user experience over the available network. Dynamic streams consist of multiple single streams of the same content, all of the different quality. RTMP stream relies on dynamically adaptive content transfer to maintain video playback at periods of uneven network quality

Progressive media players, a category that includes popular video players Youtube, Vimeo & VdoCipher, allow video portion of the future video part to be downloaded as well. Essentially it allows for a future buffer in the player. Progressive Streaming is now a common feature across all popular video hosting services across the internet. The shifting of video metadata from the end of the media file to the front allows this possibility. Thus, before the download of the complete media file, the media player has all the information that it requires to start playback.

In progressive streaming, the media is stored in the temporary directory of the associated web browser. This is the concept on which most downloaders or download software/plugins work. They are able to fetch this data that is coming into the browser.

With RTMP there is no storage in a temporary directory, and instead of continued direct streaming between the two servers. It is conceptually live and does not have any future buffer even for recorded videos.

Encrypted RTMP (RTMPE) wraps the RTMP stream session in a lightweight encryption layer. Through Encrypted RTMPE, the streaming protocol provides low-level stream encryptions for high-traffic sites. RTMPE uses Anonymous Diffie-Hellman key exchange method. In this algorithm two parties – the media server and the flash player – establish a shared secret key over an insecure channel. However, the initial point of secret key sharing is unsecure. The media server cannot verify the identity of the media player. This leaves the player vulnerable to man-in-the-middle attacks at session initializations.

RTMPS is an RTMPE over a secure TLS/SSL connection. The underlying algorithm of RTMPE remains the same, but a secure SSL connection precludes a man-in-the-middle attack from unknown third parties. However there is still the case in which the client can grants access to a third party.  Through this user can download the stream content.  In that case the video download is easy, leaving the content provider vulnerable to the potential piracy from end-users for illegal distribution.

As explained, RTMP stream never has a block of data, only a pointer to the current live data. Owing to this no local storage of data RTMPE occurs. RTMPE can therefore, with an additional layer of security, be a means for video transmission locally. As discussed, RTMPE was quite different from other streaming players in concept of its streaming protocol. Thus, not many downloaders or plugins are built to grab it. Thus, it has a certain level of protection sometimes pitched with it.

RTMP dump is an RTMP toolkit to connect to Flash Media servers just like normal flash players. It stores the data from the RTMP connection, sometimes used to capture the stream from the server. This allows local saving of the video file. This opens a means by which TV shows and videos on demand being streamed via this can be downloaded to cause piracy.

RTMP also requires direct constant connection with a Flash Media Server throughout the period of playback, as there is no local storage. Every flash client has to maintain state with the media server all the time.  This results in higher CDN cost.

Currently, CDNs have started to phase out RTMP. Although CDNs Akamai and Amazon Cloudfront have committed to supporting its streaming, they accept that usage traffic has declined considerably over the previous years. Limelight supports RTMP for video ingestion from content provider to CDN server, which routs to the video user through HTTP.

As seen above, it has primary two problems –
1. Poor streaming due to no future buffer and constant server to player connections.
2. Downloadable through RTMPdump compromises security from piracy. VdoCipher offers Google Widevine DRM encryption + Apple Fairplay DRM encryption, viewer specific watermarking, and backend authentication. This ensures the highest security from any downloader or plugin looking to hack content. The OTP given to the specific viewer is authenticated at the backend, precluding access from anyone except the intended video user.

VdoCipher has a progressive buffer-conserving player. On seeking the video to past or future timeline, the buffer remains conserved, thereby demanding lower bandwidth. Our html5 video player is optimized for serving at both low and high bandwidth – VdoCipher serves viewers in tier II and tier III cities in India, we also have major clients across Africa. Our streaming has been highly effective even at lower connection speeds. 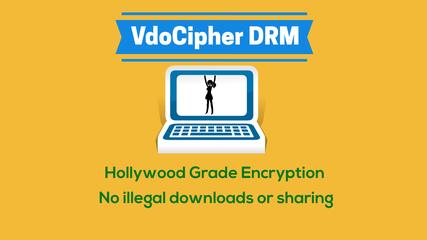