What Is a Video Streaming Protocol?

A note about protocols in the context of software systems: Protocols in the world of software systems refer to a collection of rules. These rules govern the transmission of data from one communication system to another. Protocols belong to different layers. The International Organization of Standardization (ISO) defines 7 such layers, namely, physical, data link, network, transport, session, presentation, and application. E.g., IP (Internet Protocol) is a protocol at the network layer. To take another example, TCP (Transmission Control Protocol) is a protocol at the transport layer.

Video streaming protocols can be in the application, presentation, and session layers. We now look at why you need them.

Your application will primarily perform two tasks concerning digital video files. It will store them, and it will play them back. The key considerations here are the size of the file and the ability to play it back universally.

However, most of the digital video files don’t cater to video streaming by default. Streaming refers to the transfer of video files from the encoder to the streaming host, and then from the host to the video player.

Your application will first need to convert a video file into a “streamable” file. It needs to break the file into small chunks. Your app will then send these chunks to viewers sequentially, and it will need to play them back. Video streaming protocols enable your application to do this.

How do Video Streaming Protocols Differ From Video Codecs and Container Formats?

You might often hear terms like streaming video protocol, video codecs, and video container formats in the same conversation. They are different though. A video streaming protocol is a codified set of rules and standards to deliver video files over the Internet.

On the other hand, the term “codec” means video compression technology. The term refers to a combination of “coder” and “decoder”. You use a “codec” to make a video file smaller than what was recorded. A “codec” saves space by compressing video files.

We often call a “container format” as “format”. It functions as a box containing a video file, an audio file, timing information, subtitles, and other metadata. A container format facilitates the transmission of video content.

Video streaming technology uses chunks of a video file. Container formats define how content is stored inside these chunks. A few examples of “container formats” are “.mp4”, “.m4v”, and “.avi”.

Which Factors Should You Consider When Choosing a Video Streaming Protocol?

Your choice of the video streaming protocol depends on your app development requirements. You need to keep the following factors in mind when choosing a protocol:

The following are a few commonly used video streaming protocols: 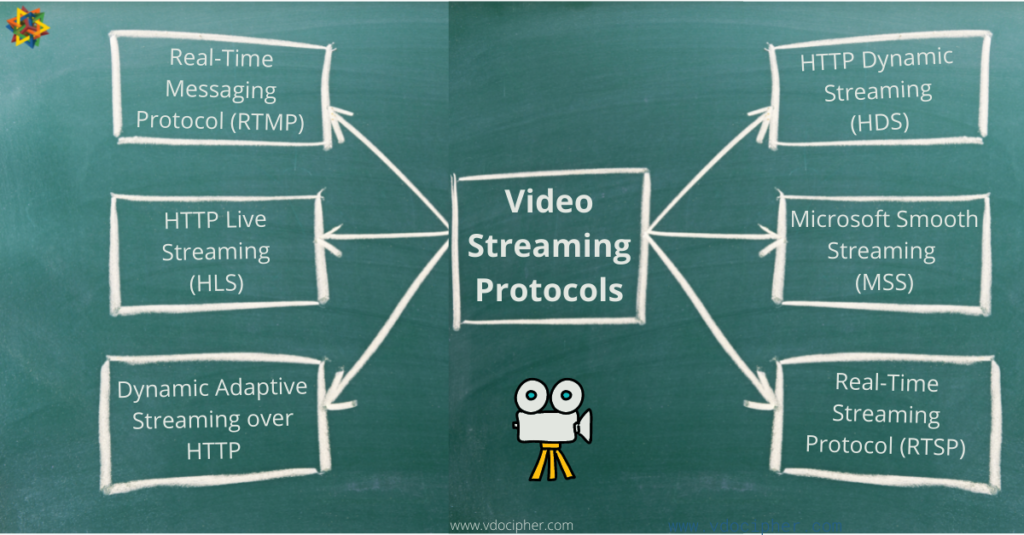 Real-Time Messaging Protocol (RTMP) has been a very popular video streaming protocol for a long time. Open standards and Adaptive Bitrate Streaming (ABS) have now reduced the popularity of RTMP. Macromedia had developed it, Subsequently, Adobe acquired the company in 2005.

The following are key points about RTMP:

Note about the compatibility of RTMP: Only RTMP-compatible players support this protocol. However, there aren’t that many anymore. Flash supported this, and Adobe stopped supporting it in 2020.

RTMP has the following disadvantages:

The different variant formats of RTMP are as follows:

Apple developed HLS (HTTP Live Streaming), a popular video streaming protocol. It was released in 2009. Earlier, HLS would support only devices from Apple like iPhones and iPads. It now supports a wide range of platforms. At the time of writing, HLS streaming is widely used by professional broadcasters.

The following facts about HLS are notable:

The advantages offered by HLS are as follows:

HLS has prioritized the quality of the streaming experience over keeping the latency low. The latency of HLS is its only notable disadvantage, and you need to tune it to reduce latency.

The different variant formats of HLS are as follows:

The Moving Pictures Expert Group (MPEG) developed Dynamic Adaptive Streaming over HTTP (DASH) in 2010-2011. It published MPEG-DASH as a standard in 2012. MPEG-DASH is an open-source industry-standard alternative to HLS. It provides a stiff completion to HLS.

The advantages offered by HLS are as follows:

Apple doesn’t support MPEG-DASH on its platforms like iOS and Apple TV. That’s the only notable disadvantage of MPEG-DASH. Also DASH is used for react native video playback.

MPEG-DASH has another variant. It’s MPEG-DASH-CENC, where “CENC” stands for “common encryption”.

Adobe developed HDS (HTTP Dynamic Streaming) in 2009 on the foundation of RTMP. HDS is compatible with the adaptive bitrate protocol, and it was used with Flash Player. Adobe doesn’t support Flash anymore. This has reduced the popularity of HDS, and we anticipate it will not have much use in the future.

The following key facts about HDS are notable:

HDS supported ABS, and it worked well with Flash. These were its advantages. HDS is proprietary technology though, and support for it will likely discontinue. That makes it unsuitable for most purposes.

Microsoft developed MSS (Microsoft Smooth Streaming), a video streaming protocol in 2008. The company built this proprietary protocol for use with Silverlight player applications. MSS supported ABS on Microsoft devices. Its strong content protection features helped to prevent piracy, and it was used for TV. MSS can’t compete with the popular HTTP-based video streaming protocols. We don’t expect it to be supported for much longer.

Head of Digital Marketing at Vdocipher. I love the art of connecting the right product to their users. When i’m not doing that i love getting lost in books.