VdoCipher Android SDK integrates Google's SafetyNet protection on versions 1.6.0 and above. This provides additional protection for your videos against the following concerns:

To enable SafetyNet protection for your Android apps, you'll need to

For any doubts in the below steps, contact support@vdocipher.com

You need an API key from Google to do SafetyNet attestation. To create a key and embed this key, complete the following steps:

This API is limited

The default quota allotment (per project) for calling the SafetyNet Attestation API is 10,000 requests per day across your user base. You can monitor your API usage from the Google APIs Console. You can request increased quota by contacting Google. Learn more.

On our SDK, we have implemented a mechanism such that this is only called once per app instance. The API key will not be used again for each playback, unless the app data is cleared.

2.1. Obtain the sha256 hex digest of the certificate (debug or release) used to sign the APK before uploading to Google PlayStore.

If you are using your own key to sign the APK, use the keytool utility which comes as part of the Android SDK. It will return the sha256 digest in hex format. (visible under Certificate fingerprints > SHA256)

Note: Commands below are macOS specific. For other OS, use corresponding commands.

If you use App Signing by Google, the fingerprints can be obtained in the Play Console.

2.2. Convert the sha256 fingerprint value obtained in step (1) to base64 encoding. You may use the following command after copying the fingerprint to the clipboard. Or you can use any online tool to do this.

This command is removing the colon (:) and converting the hex value to base64.

OTP creation must be done on your backend

The above are extra parameters in the JSON body sent to this API along with ttl etc. See sample curl request below in next section.

If your backend API is used by players other than the Android app e.g. iOS, web, then you should ensure that the above parameters are added only when the request is coming from the Android app.

4. Adding to VdoInitParams inside Android app​

After finishing step 1, we recommend testing the SafetyNet implementation on the debug APK first, on your local test devices and emulators. For this, you need to use the debug signing certificate. In step 2, use the debug keystore path in the keytool command (usually .android/debug.keystore).

For testing locally, you can create SafetyNet-enabled OTPs using curl with the additional androidAttest and apkCertificateDigestSha256:

Above code is only for development purposes.

Below is a flowchart for how the final workflow should look like. 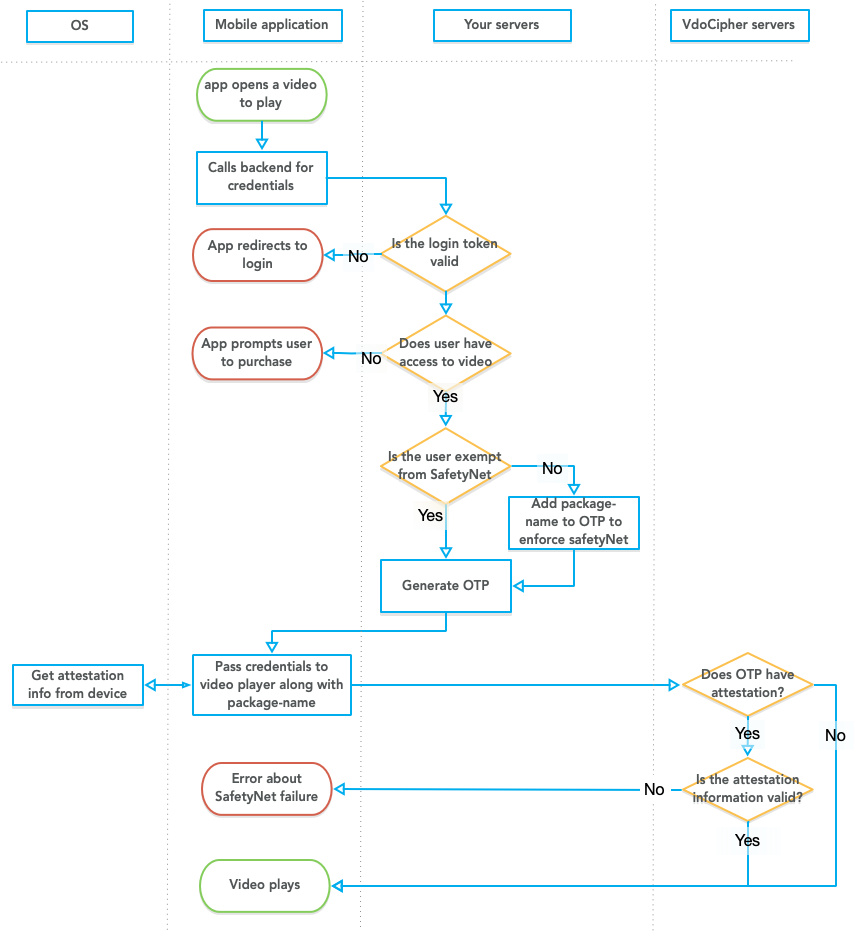 Below are the possible error that can occur when using SafetyNet along with steps to resolve it.

SafetyNet is a security feature provided by Google to authenticate the app software against tampering. Verification of the app's signature is done by APIs provided by the Google Play Store and implemented by Manufacturer. There will be few devices not able to verify the app's signature. This will be rare but it is possible. It is also possible that the same device model will work for one user but not for another user.

It is recommended to keep a list of users on your backend database which are exempt from the verification. If a particular user's device is consistently giving errors, you can set this user to be exempt. This can be done by keeping a user-attribute associated with the user in your backend.

This way, when you know that a valid user is trying to access your app, they still can get it working after a call to your support team.

Check the third decision box in the above flow-chart for how to implement this logic.